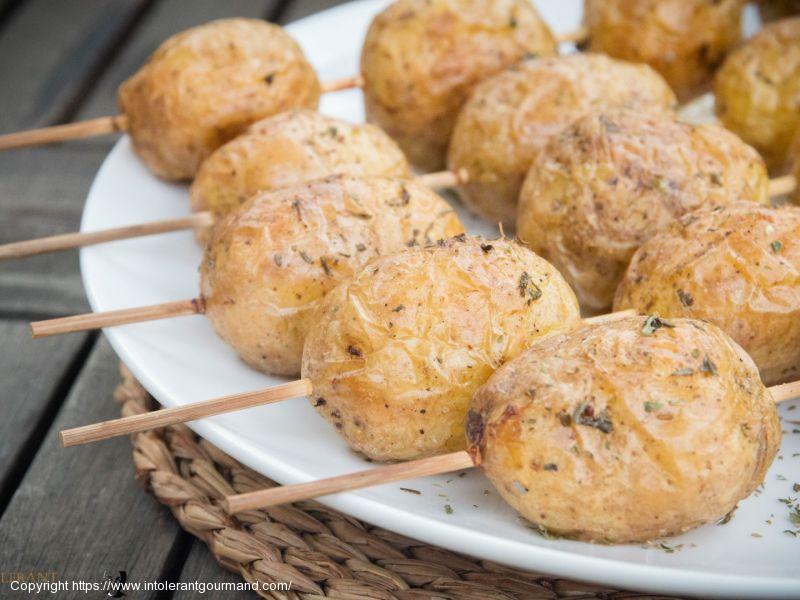 The perfect addition to any meat, fish or plant based dish, these British Gems are little golden nuggets of deliciousness!

Add the potatoes to a microwavable bowl along with 1 tbsp water. Cover with cling film and heat for 5 minutes on 800w in the microwave until slightly softened.

Carefully remove and leave to cool slightly before removing the cling film and draining the water.

Using a skewer, carefully add 3 – 4 potatoes and place on a baking tray.

Repeat until all of the potatoes have been used.

In a small bowl, add the olive oil, salt, pepper, parsley and garlic and mix until well combined.

Use a pastry brush to coat the potatoes with the oil mix.

Add to a BBQ and cook for around 15 minutes – turning regularly to avoid burning. (Alternatively place in a preheated oven at 180c for around 20 minutes, turning after 10 minutes to ensure even cooking)

Remove from the BBQ/ oven and leave to cool slightly before serving. 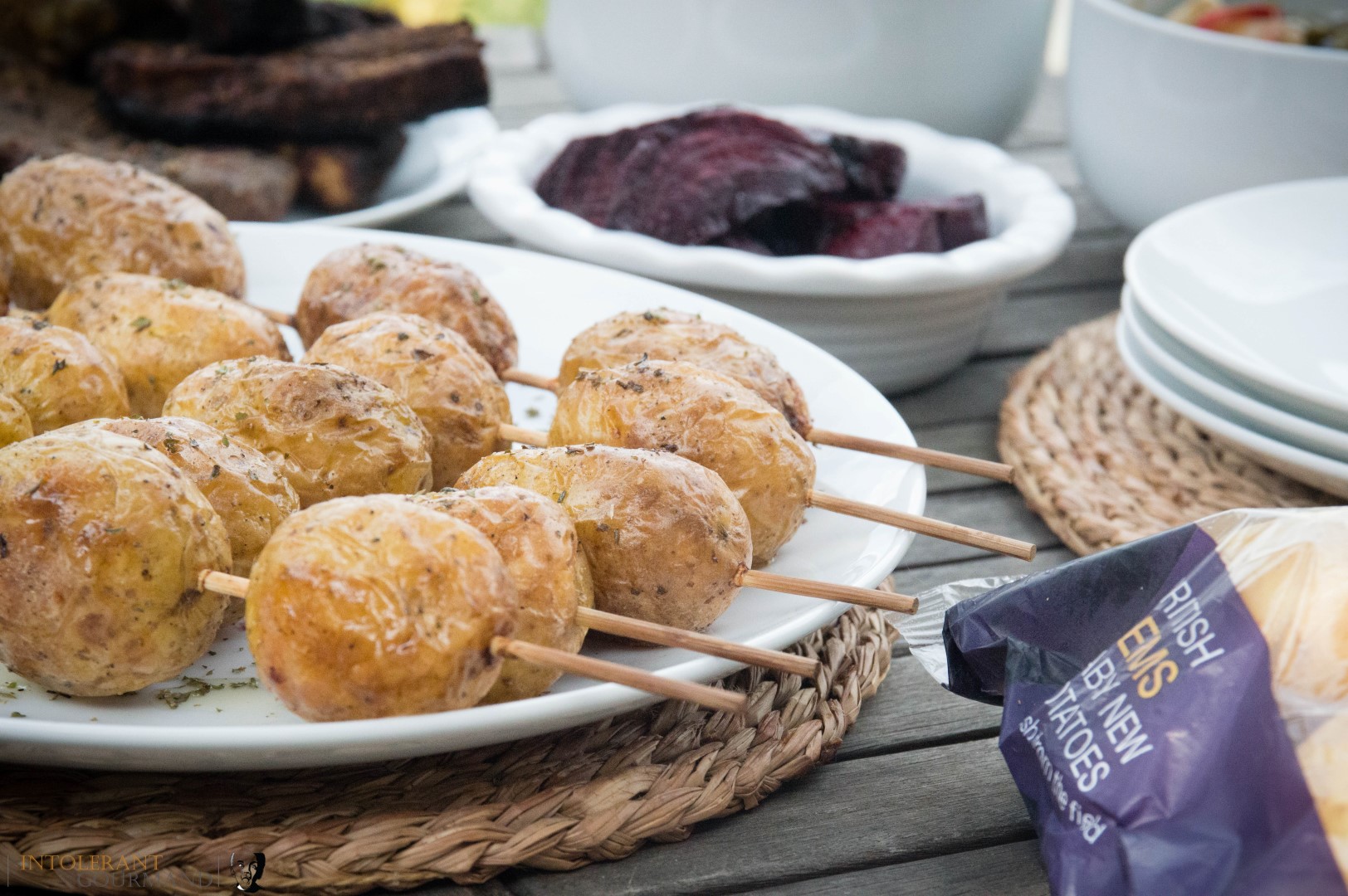 The UK is currently experiencing a heatwave, the longest in many years. Yes people, we’ve actually got a summer as summer was intended and we’re all loving it!

It means that we’re all getting to spend loads of time outside, enjoying the glorious weather, and topping up our vitamin D levels to bursting point.

It also means that we’re all not cooking as much as normal, which is ok because cooking has been replaced with BBQing. And I’m sure I’m not the only one who will find an excuse to use the BBQ for pretty much anything.

Now, as it’s BBQ season I can get away with it, and whilst a BBQ is often all about the meat and fish, if you’re a foodie like me, then you’ll probably enjoy making salads and side dishes too! I can’t ever eat ‘just’ meat or fish, it needs to be balanced out.

Enter ‘Taste the Difference British Gems’. These little nuggets of gold are in season at the moment and can be found exclusively in Sainsbury’s stores up and down the country right now!

For me personally, they are far superior to the often used Jersey Royal due to their distinctive buttery flavour, and particularly golden colour. And I love the fact that they are freshly dug every day before they are washed, packed and then distributed to Sainsbury’s stores so that they are on the shelves within 48hrs.

Unlike other potatoes, these beauties are truly versatile. They can be:

As if that wasn’t enough, they taste even better when the skin is left on. Now, the Nutritional Therapist in me loves this, because the skin is where the most nutrients are usually found.
It means that all you have to do before cooking with them is rinse them in cold water – what’s not to love about that?!

British Gems and Sainsbury’s tasked me with coming up with a recipe that would showcase these fabulous little potatoes, and after I put my suggestions to a vote, the family came up with ‘Garlic Crispy Potato Skewers’ as they are perfect for BBQ’s!

Try them for yourself, you can buy them here: Taste the Difference British Gems

And if you need even more inspiration, then there's these fab recipes you could also try:

(NB: This is a collaborative post with British Gems and Sainsbury’s but all comments are my own) 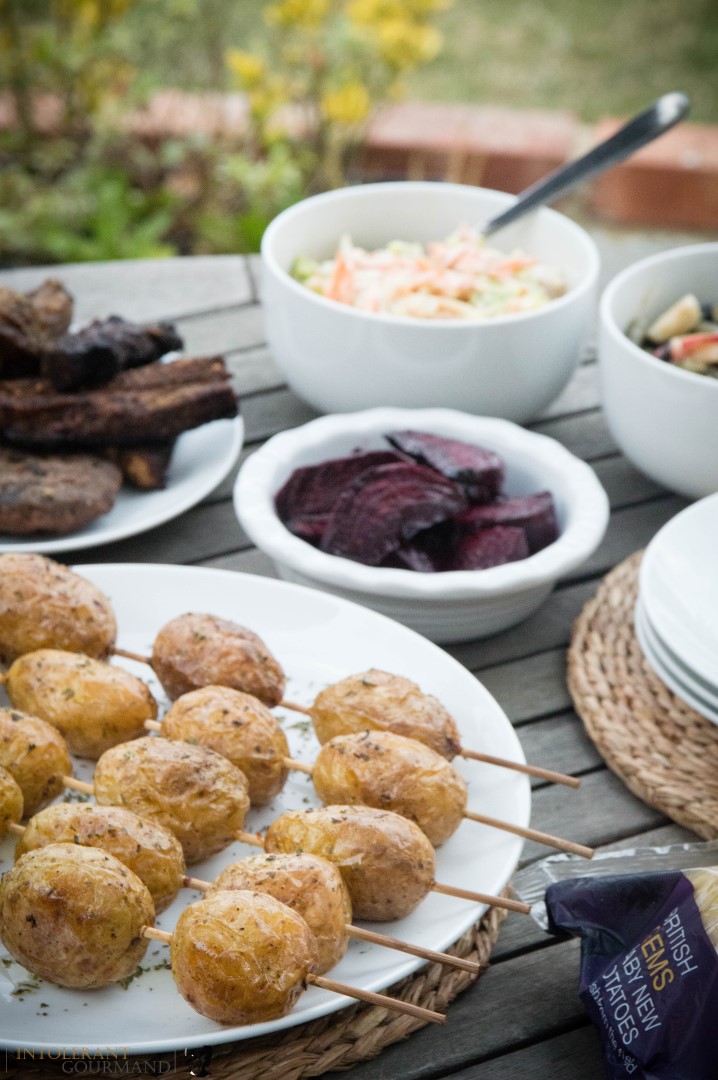