Owning a large American style fridge freezer is a revelation with a family of four and as a recipe developer! 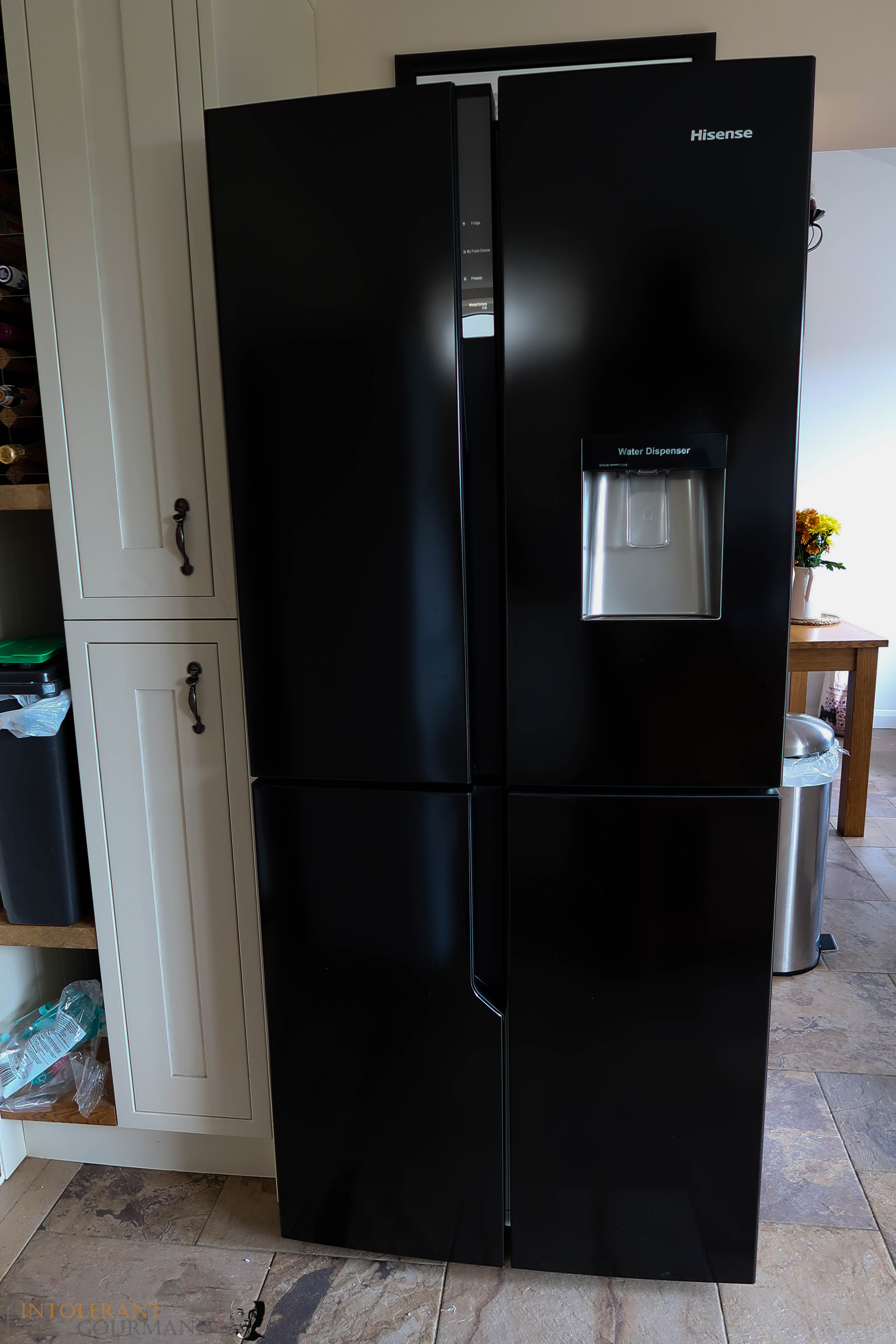 Having only ever had a traditional fridge freezer for many years, I’ve never had the opportunity to have a large fridge freezer in my kitchen until now as we’ve had no space before.

With a growing family, and cooking many meals from scratch, I would quickly run out of space in the fridge, and the freezer took no time at all to fill as well. And when it came to Christmas…. Well, that was a whole different type of headache! I tend to invite the family to us because it’s easier with Callum’s allergies for me to do the catering. But, it would mean that I could only have the food for Christmas Day and Boxing Day in the fridge because we just simply didn’t have the room.

So when AO.com asked if I'd like to review the new HiSense RQ560N4WB1 American Fridge Freezer, I jumped at the chance!

Quite frankly, the Hi-Sense American fridge freezer is a revelation! It’s so quiet, and yet so powerful. Our previous fridge freezer had been overworked (now that’s the understatement of the century!!) and it was hissing and banging like it would explode at any moment. And when it did this at night, when the house was dark, and you were watching a movie, it became quite unnerving!

It holds the temperature perfectly (again something that our old fridge was no longer doing) and even has a no frost guarantee! This in itself is worth gold to me! Have you ever tried to defrost a fridge before? No? It’s a right pain in the ……… You end up spending ages chipping away at built up ice, bending all manner of utensils, boiling endless kettles to attempt to defrost it fully.

So back to this fridge freezer. 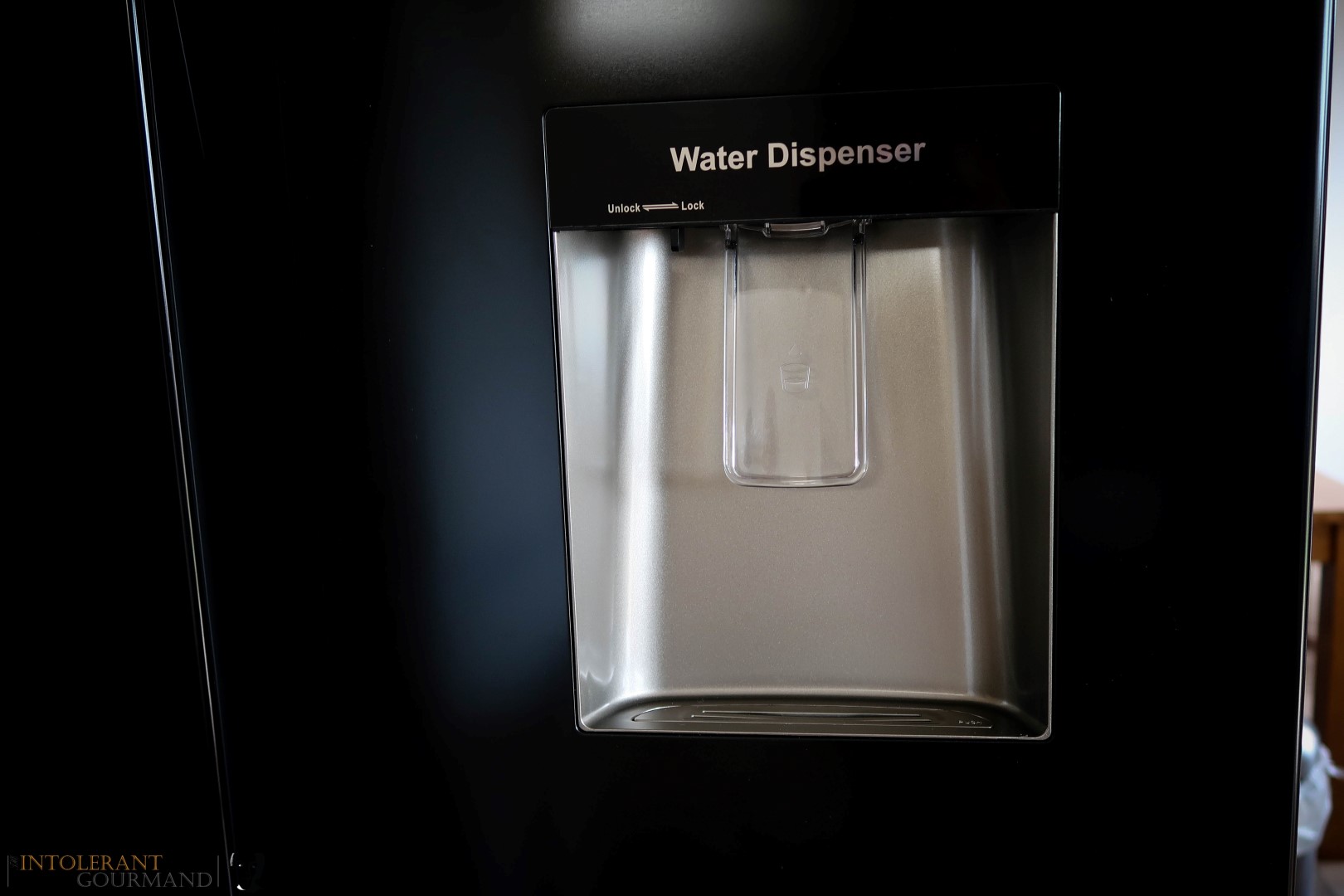 For starters, it looks lovely. It’s a stylish addition to our kitchen, modern looking without being too much.

The fact that it is split half fridge (on top) half freezer (on the bottom) in the same way as a traditional fridge adds to its charm and ease of use.

The doors are easy to open, and both open at the top to provide easy access to the fridge and also the same for the freezer below. There’s also an alarm to warn you that the door has been open for too long, or that it’s not been closed properly – very useful if you have children and they don’t close the door. Mine have been caught out a few time, and it’s made them realise they need to be more careful.

With blue lights in both the fridge and the freezer, it’s easy to see what’s inside, and I have to say, it adds a nice touch. 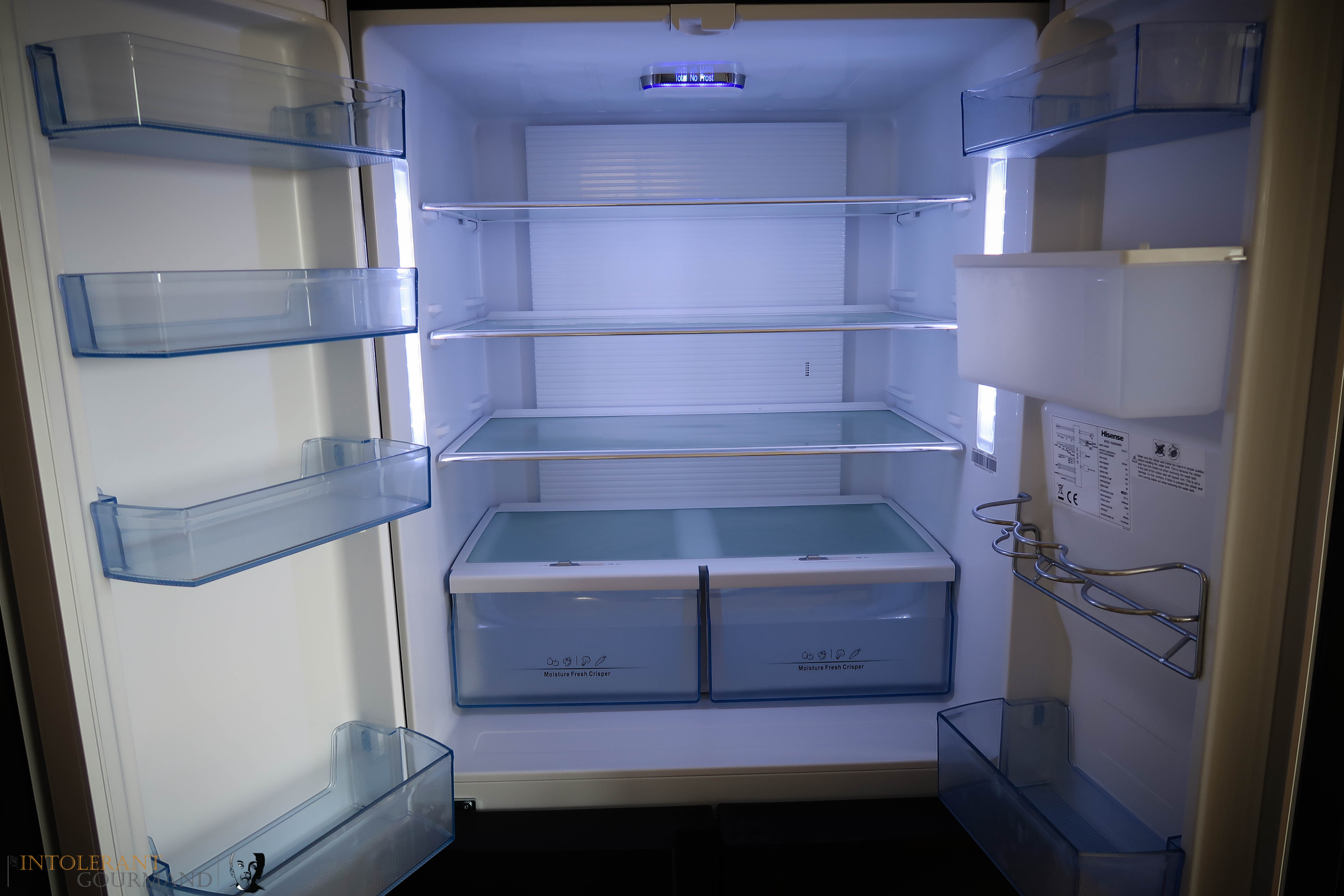 It has the capacity to hold a fair amount of food – at last count during our most recent food shop, we managed to get enough food for a family of four, a meal for 6, and fully restock the freezer and there’s still space available should we need it. The stats on the AO.com website suggest it has a 431-litre capacity (23 bags of food shopping) which I’d say is pretty accurate. To say I’m impressed is an understatement!

The freezer function is great too. Both compartments work as a freezer, and you have the option to turn one of them into a fast freeze space should you need to. It also comes with a fab ice cube tray that enables you to store ice cubes and re-fill the tray simultaneously. It’s also got a twisting function to get the ice cubes out with ease! You do need to be careful not to overfill the tray though, as we found out when we couldn’t get the previously frozen ice cubes out as they’d all stuck together.

On top of that, there’s also a holiday function to reduce the amount of electricity used while you’re away, whilst still retaining temperature – a clever and handy function for sure!

And then there’s the water dispenser, with a capacity of 3.5litres. It’s easy to fill, and great to have cooled water, ready to go! The children have particularly loved this function, and if I’d known their water consumption was going to increase so dramatically, I’d have considered such a fridge much sooner! 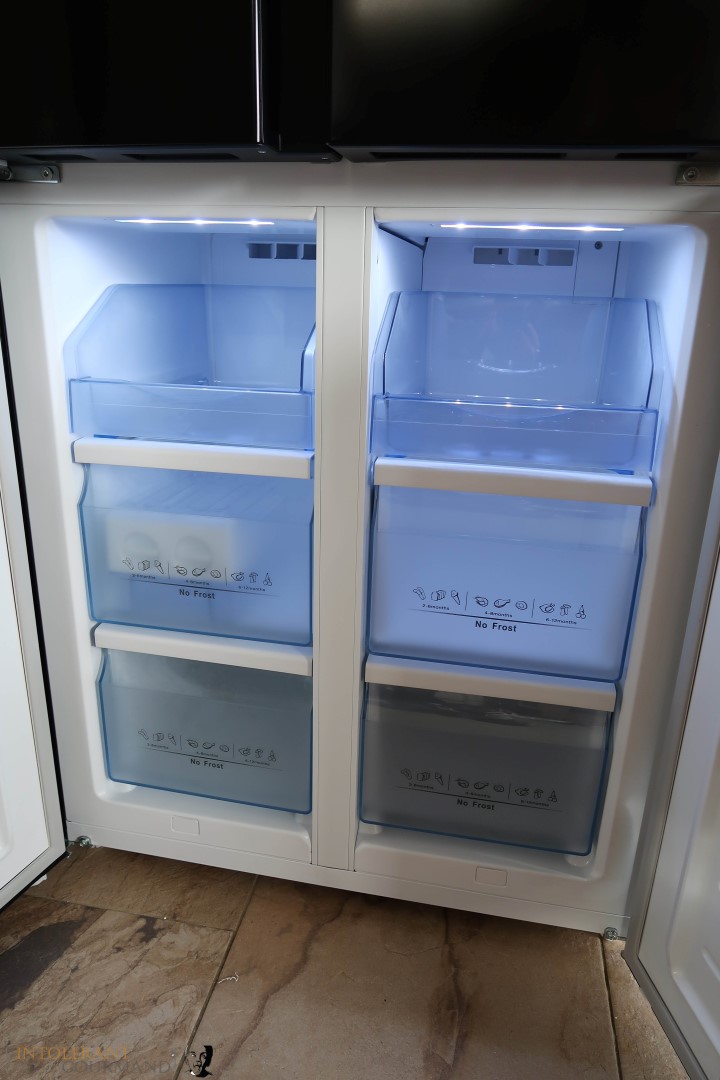 The dimensions of this fridge freezer are really good (H 181.2 x W 79.4 x D 70.0), and it’s one of the smaller ones on the market which I particularly like as it’s not overpowering in our kitchen.

Sometimes they can dominate the room, and this one doesn’t do that.

It’s easy to install, and the lovely delivery men from AO were friendly and helpful in spite of being stuck in horrendous traffic and working hours past when they should have finished. They couldn’t do enough to help and remained cheerful and friendly throughout.

The only bit I can possibly find fault on, is that unlike our old white one, the children’s finger prints can be seen on the black. But it’s so minor, it really doesn’t matter.

If you’re looking for a new fridge freezer, then I can’t recommend this one enough. We absolutely love it!

(NB: AO.com sent us this HiSense Fridge Freezer in return for an honest review. All opinions are my own) 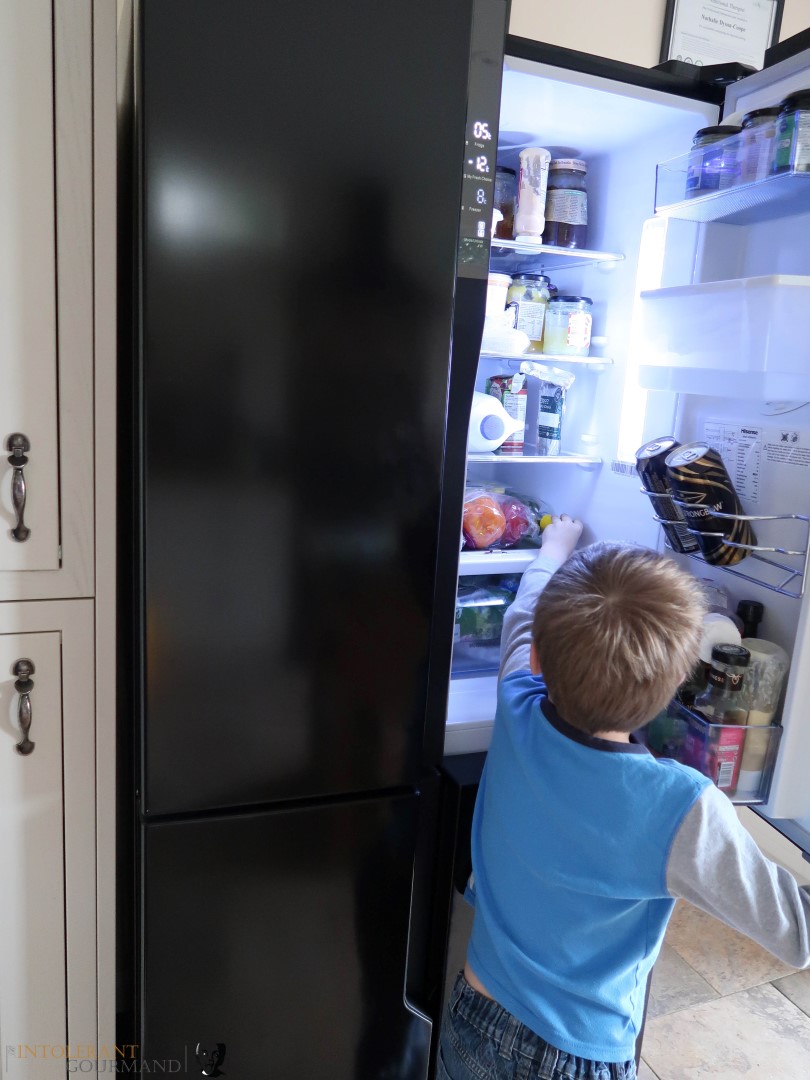