Life is always full of ups and downs, for everyone. Let’s face it, life would be boring if it followed the same monotonous pattern day in day out, we’d be craving for some sort of excitement to break up the tedium.

A couple of months ago, Callum had a very nasty chest infection. We had no idea. He had no obvious symptoms showing at all, a bit of a cough but nothing major, a bit of a snotty nose, but show me a toddler who isn't affected by snot trails regularly! The only thing that had me getting Callum checked by the GP was that for 3 days on the trot, he was waking around 10-11pm at night, after being asleep since around 7pm, and puking up clear fluid.

It seemed innocent enough, but I mentioned it in passing to the GP as it was 3 days, and Callum was having a check-up due to his eczema flaring up quite badly. (I'd been sufficiently concerned the night before to phone out of hours because Callum was showing signs of 'staf' infection). Turned out I was very right to. The GP took it quite seriously, listened to Callum's chest, and found out that his right lung was so full of gunk, it was deemed 'solid'. They couldn't hear any air going through, and said that he was on the borderline for pneumonia, and gave Callum strong antibiotics. After 2 weeks he needed a further bout of antibiotics and also an inhaler to help him. So, he had it quite bad!

Fast forward to just over a week ago. Callum woke up, slightly raspy chest, and knowing it was a particularly high pollen count, assumed it was to do with this, gave him his inhaler, and didn't think much more of it. Yep, that didn't last long! I went off to work, and Jonny took Callum to our child-minder Mel for 10.30am.

I phoned Jonny at 11am to see how the morning had gone, and to check how Callum had been. Later on in the day, Jonny remembered a seemingly innocent comment from Callum en route to Mel 'want mine rocket Daddy' - we both didn't realise, but he was asking for his inhaler and spacer!

By 11.30am, Mel was on the phone to me at work, strongly suggesting that I come and get Callum immediately as he wasn't breathing very well at all, and he had fallen asleep and it was impossible to wake him. Mel doesn't do something like this lightly, she knows Callum pretty much as well as we do. We trust her completely with his life. She's got to know all his little quirks in the time she's looked after him, so if she's worried, I know I need to be too!

It was another of those blood run cold moments!

When Callum doesn't wake up, it usually means he's got a nasty virus/ infection going through his system, and it causes his body to go into meltdown. Last time was a 3 day stay in the Children's hospital, on double iv antibiotics, iv antiviral, oral antibiotics, oral antiviral, drips galore, and so on.

On my hour long journey from work back to Mel's, I phoned the GP's to get Callum an urgent appointment, and was advised they could fit him in at 3.20pm. Based on the information I'd been given, I simply wasn't prepared to wait until then, so I pushed back quite strongly. Luckily it paid off, as the GPs told me to take Callum straight to the surgery to be reviewed as soon as I arrived. Which I duly did, and thank god I did!

As soon as we got there, the triage nurse called us straight in, took one look at Callum and immediately decided he needed to be nebulised because his breathing was shallow and laboured, or to use their terminology 'a child in respiratory distress'. She wasn't wrong, Callum was working overtime, his stomach muscle was prominent, he was trach ++, the poor boy was really struggling.

Callum totally freaked out with the nebuliser (a mask that emits a vapour which is the equivalent to around 10 puffs of a salbutamol inhaler), so we really struggled to get this vital drug into his lungs to help him breath better.

After waiting 20 minutes to see if it had done anything, we went in to see the GP. Callum initially showed signs of improvement, but as I was talking to the GP, I could tell he was going downhill again, so I questioned the GP about it. To begin with, the GP suggested a course of drugs to improve, and to take Callum home and watch for any particular signs to be aware of. But with Callum, I can't afford to do that because he plummets to bad levels so fast. So I pushed back!

Boy am I glad that I did! Not 5 minutes later, he'd got really bad again, and the GP had no option but to refer us immediately to A&E for further drugs.

8hrs later, another round of being nebulised, steroids galore, inhalers galore, and a lot of consultants and paed consultants seen, one struck 'gold' when he heard a crackle on Callum's right side lung. He was pretty sure it was a continuation of the infection from a couple of months ago. Because it has been so long, he's ordered a chest x-ray for a couple of weeks time, to rule out anything nasty going on.

We're not thinking about that for now, we'll cross that bridge if and when we need to worry about it!

For now, we're just thankful that the drugs have made Callum significantly better, and that his breathing is vastly improved!

And it just goes to show, that as always, a mother knows her baby best, if she says something's not right, chances are it's not!

Another day, another questionable food...

Callum has been dealing with his allergies incredibly well since a young age. He has learnt to live with them, probably better than most, because it has been such a difficult journey for him to get to where he is today.

Most weeks tend to be 'interesting' when part of the world of allergies. There is always something that you have to watch out for, be aware of, try to get your head round, and so on. It's a minefield! This week has been no different! In fact, this week has been very interesting, educational and worry some! Let me explain...

There's brave, and then there's Callum...

It's safe to say that Callum deals with challenges on a daily basis with stoicism, bravery and courage. Every day he has to overcome sore, burning, itchy skin all over his little body, as well as cope with constant weepy patches, and any additional reactions to anything he's been exposed to. That's a lot for a little dude to cope with, and we are immensely proud of how he handles it all. 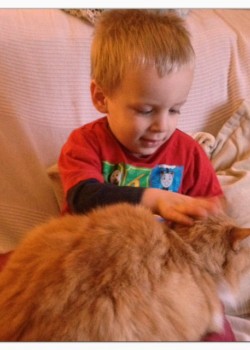 More often than not, family pets tend to precede children in families. I'm sure the majority of us can relate! The cat or dog arrive soon after moving in with your partner/ boyfriend/ husband, and everyone starts commenting with the classic 'ahhh, pets always come before children' or 'getting the practice in of looking after something else before the babies start coming along' and so on!

A party is a big deal in a child's social calendar, any parent can tell you that. The excitement of receiving an invite, choosing a present, and wearing a special outfit all help to build the anticipation of a fun time. And then, there's the party food....... an abundance of sweets, cake, pizza, it's like Christmas has come early for the children! If you're a parent of a child with allergies, it becomes a huge nightmare!!

Like most young children, Callum absolutely loves to snuggle with his teddy bear and favourite blankies. He has 3 very special blankies, 2 which were made for him by a friend which he has had since birth, and the other specially chosen and embroidered with 'el snottio' from his lovely child-minder. With all of these items, the world is quite literally 'coming to an end' if he doesn't have them!

Having always been passionate about cooking good, hearty and scrummy food for the family, I was determined to make sure that Callum was able to eat the same as us as much as possible. My goal was to try to work around everything he couldn't have, to find a solution that he could have. It was important to me that we could still have a family dinner, so I've spent close to 18 months working through a large number of the regular recipes I make, tweaking, changing and learning how to recreate them with ingredients that were safe for Callum. I've also come up with a whole host of new recipes specifically created to cater for Callum's needs, that the whole family can enjoy. 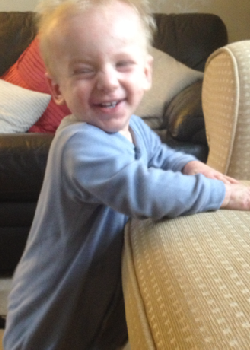 With a diagnosis of multiple allergies, and living with the daily battles associated with eczema, it's easy to forget about the rest of the challenges involved. You wouldn't think so, but simple things like going to a toddler group can become a massive nightmare. I remember thinking it would be good to get out of the house and give Callum and myself a change of scenery and something new to do. Quick solution, attend a local baby and toddler group where Callum could play with other children of his age and take his mind off things. It would have been lovely if it were that simple!