From full function remote control trucks, to tough metal trucks, and even kinetic sand to replicate the awesome arena experience, the new Monster Jam Monster Trucks collection is one all fans of monster trucks will love! 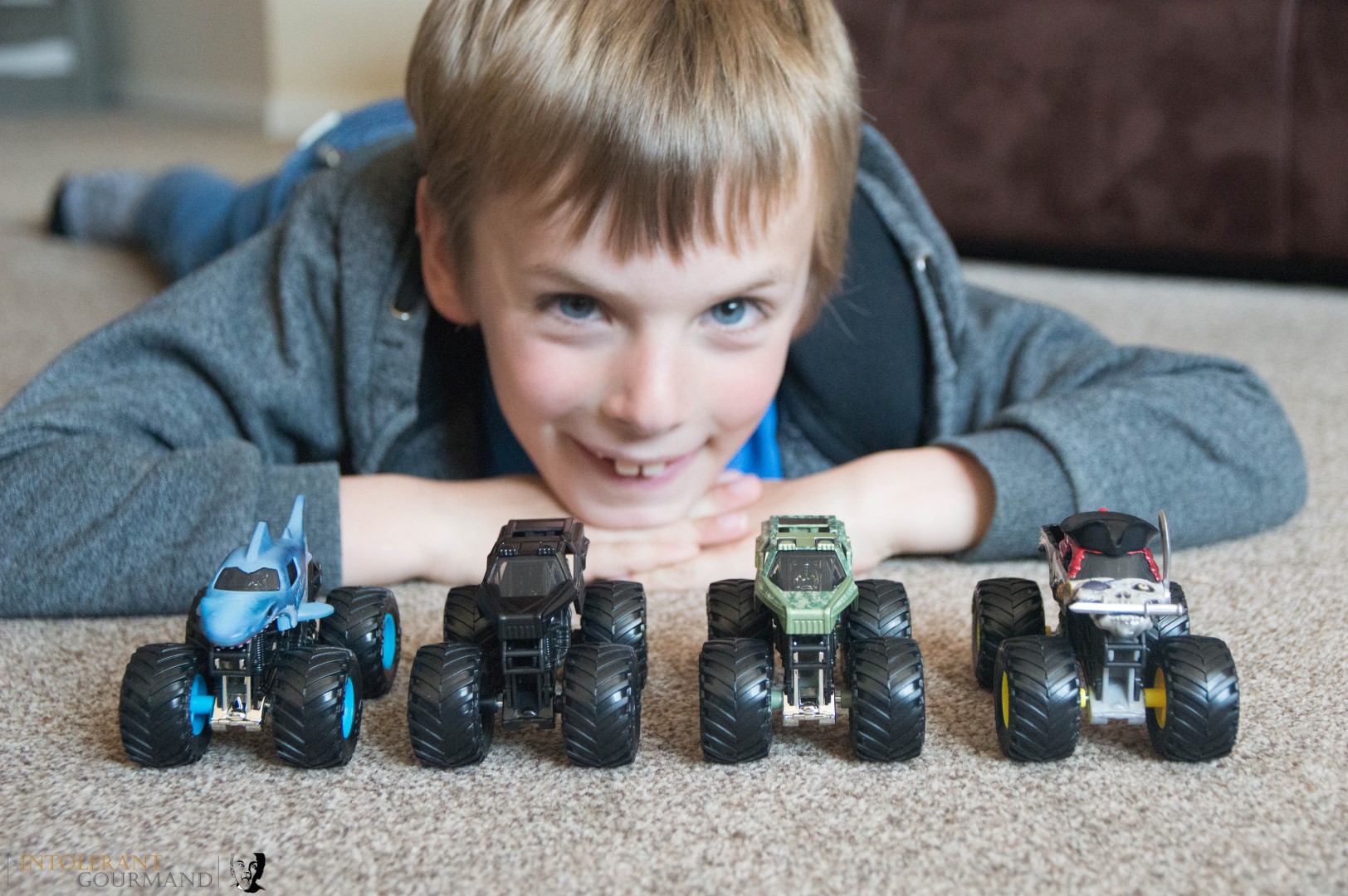 (ad - gifted for review) Anyone with young boys will tell you that since Blaze and the Monster Machines hit our screens there have been massive monster truck fans up and down the country. Callum is no exception to this, and is an avid fan. We even took him to Santa Pod to see the monster trucks in action, and we’re planning a trip to Monster Jam next year which will blow his mind!

So imagine when Spin Master got in touch to send some of the new Monster Jam toy collection for Callum to try out….

He couldn’t believe it when he opened the package up. We’d spent 2 days working on tv projects, and he deserved a treat for his hard work…. And what a treat. 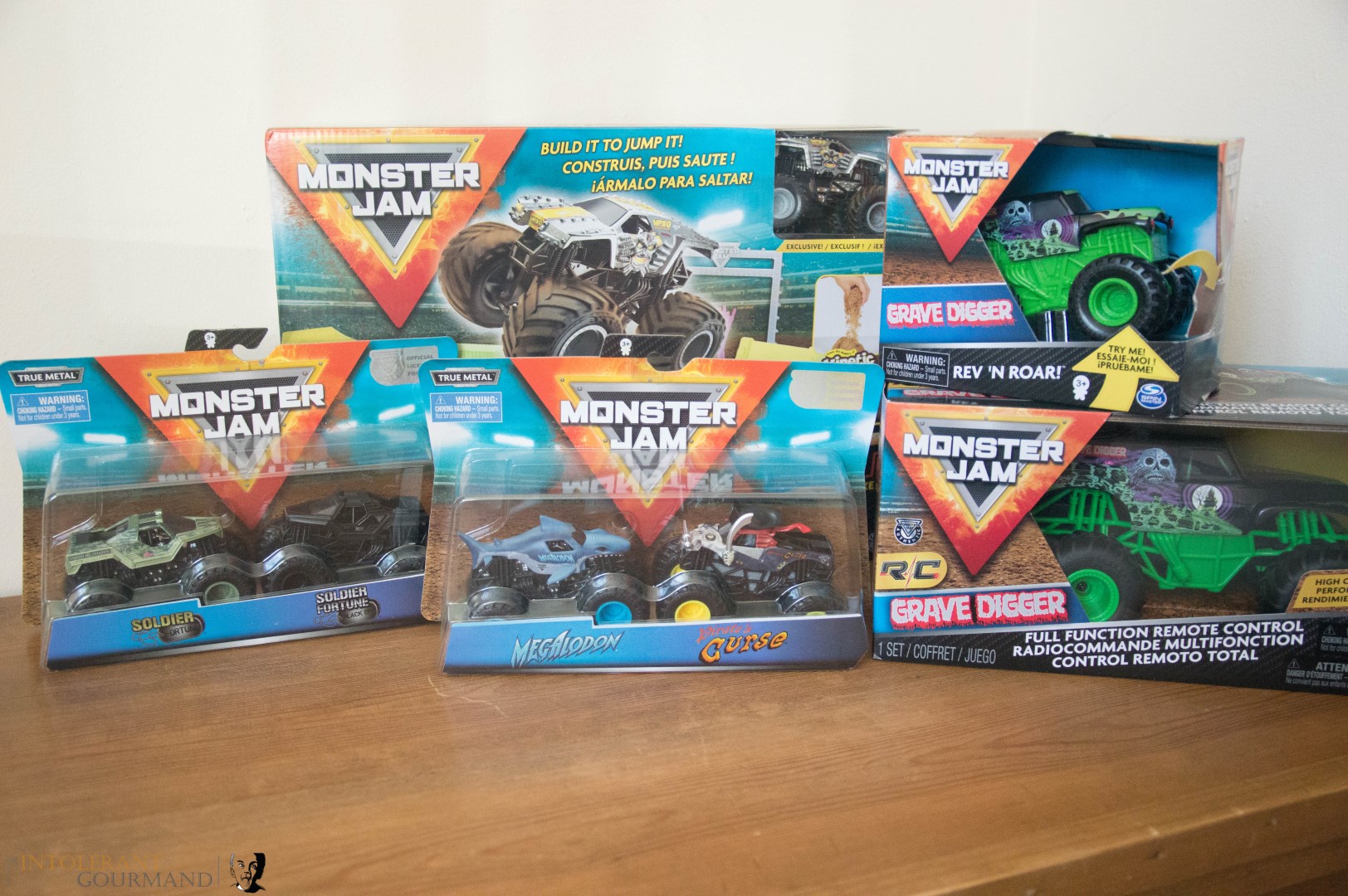 From the collection, he was incredibly lucky to have been sent:

His excitement was off the scale, and he couldn’t wait to try them all out! 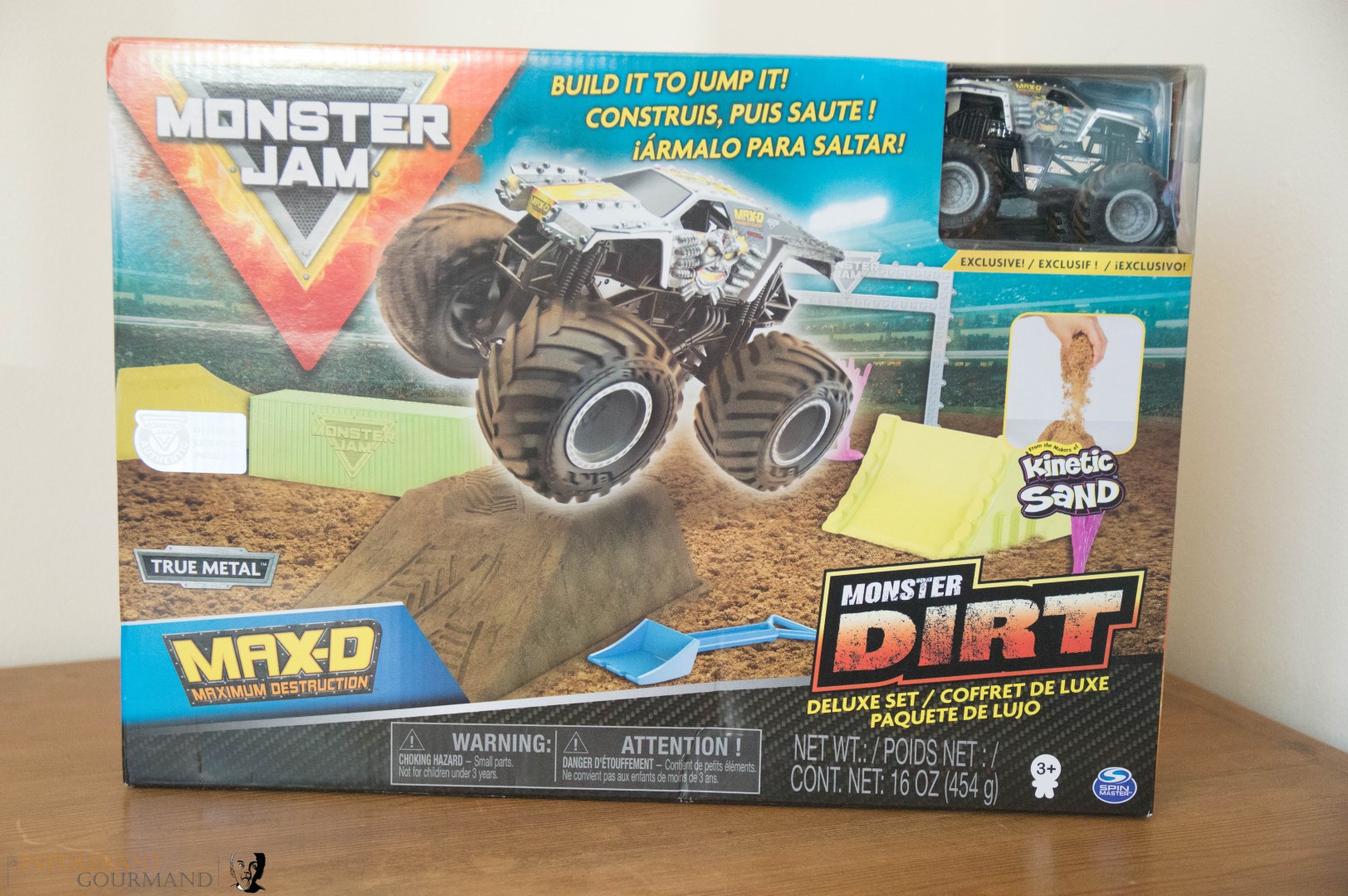 A die cast model, packed with so much detail, and accompanied by a launch-ramp mould, entry gates, fireworks spout, shipping container mould and kinetic sand that replicates the dirt in a Monster Jam arena means that you can create your very own arena.

It promises hours of fun as you can rebuild your arena however you like, and as many times as you wish.

The exclusive edition Monster Jam truck that comes with the kit has been much coveted by Callum, and he was delighted to see it as part of the set. 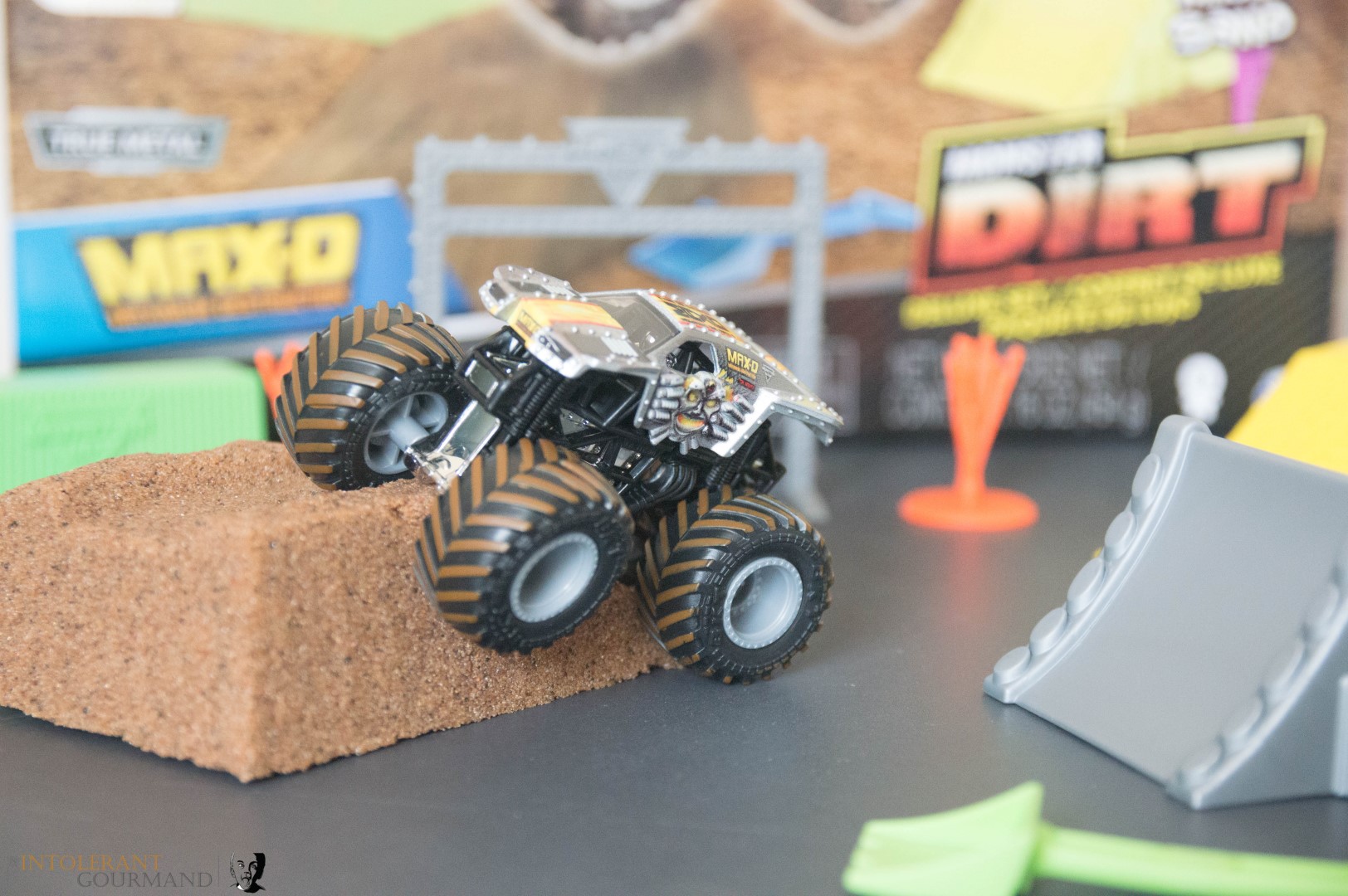 There are remote control cars, and then there’s this truck! It’s a heavy duty, sturdy truck that allows you to perform all sorts of tricks, just like a Monster Truck would. The chassis is strong, and it comes with official BKT Tires that move in the same way as a real truck. Powered using AAA batteries, it’s a great toy, and Callum loves it! 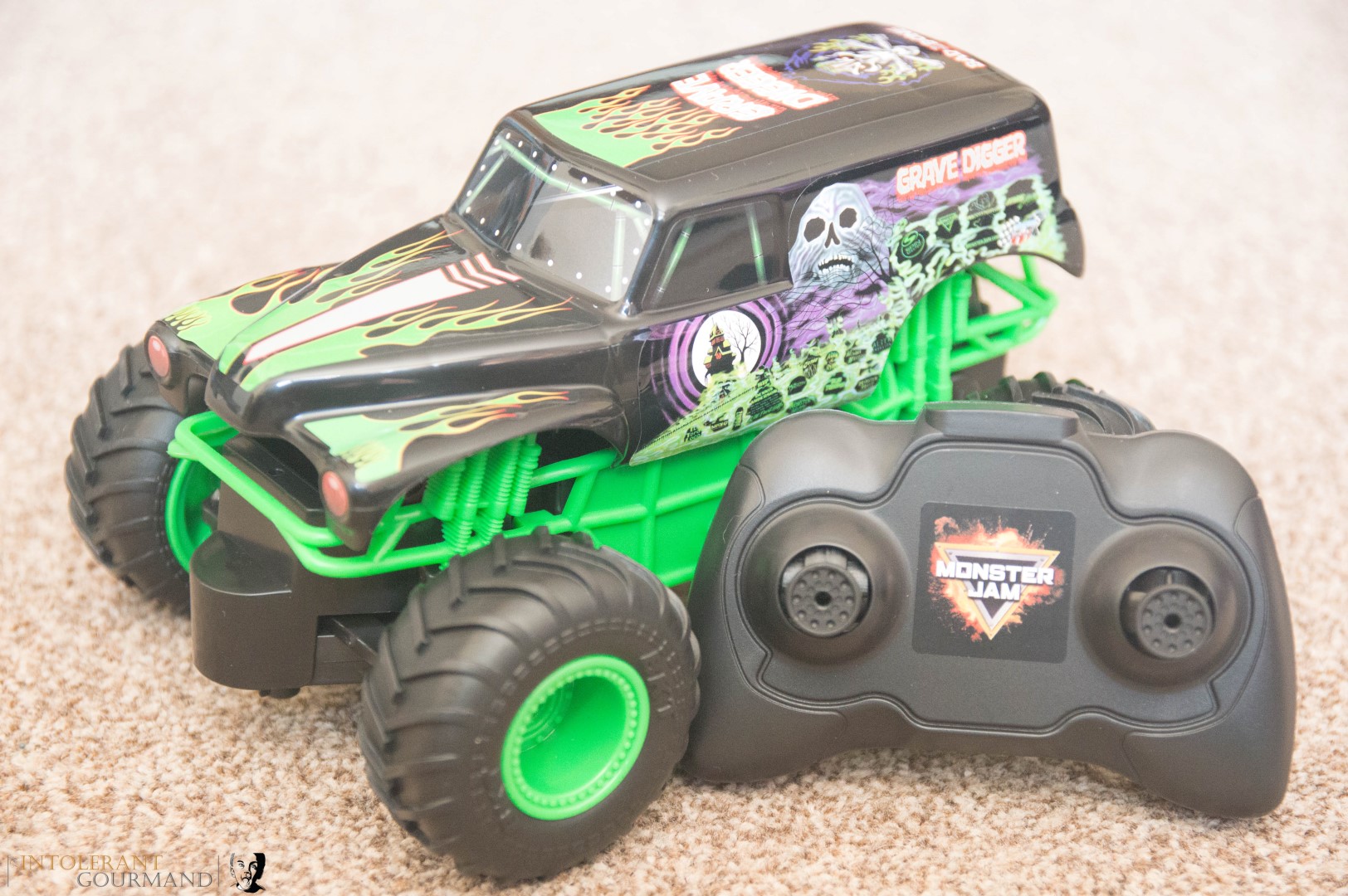 These packs are perfect for on the go toys. Packed full of details and graphics, they even have stylised chrome rims, which according to Callum are ‘super cool!’.

Strong, easy to roll across any surface, and with wheels and chassis that behave in the same way as the ‘real’ trucks, you can build your own course with obstacles and know they’ll get through with ease.

Callum has been testing these out for a couple of weeks now, and they have gone everywhere with him, even to Channel 5 when he did some live TV with me. They were sat next to him on the chair as he refused to let them go!

This is geared more to younger children, although Callum still loves playing with this too! Like all typical young children’s car/truck toys, this can be pulled back or pushed forward to help propel the movement. It has an additional sound feature which mimics the iconic sound of a Monster Jam truck revving up before it makes its move! 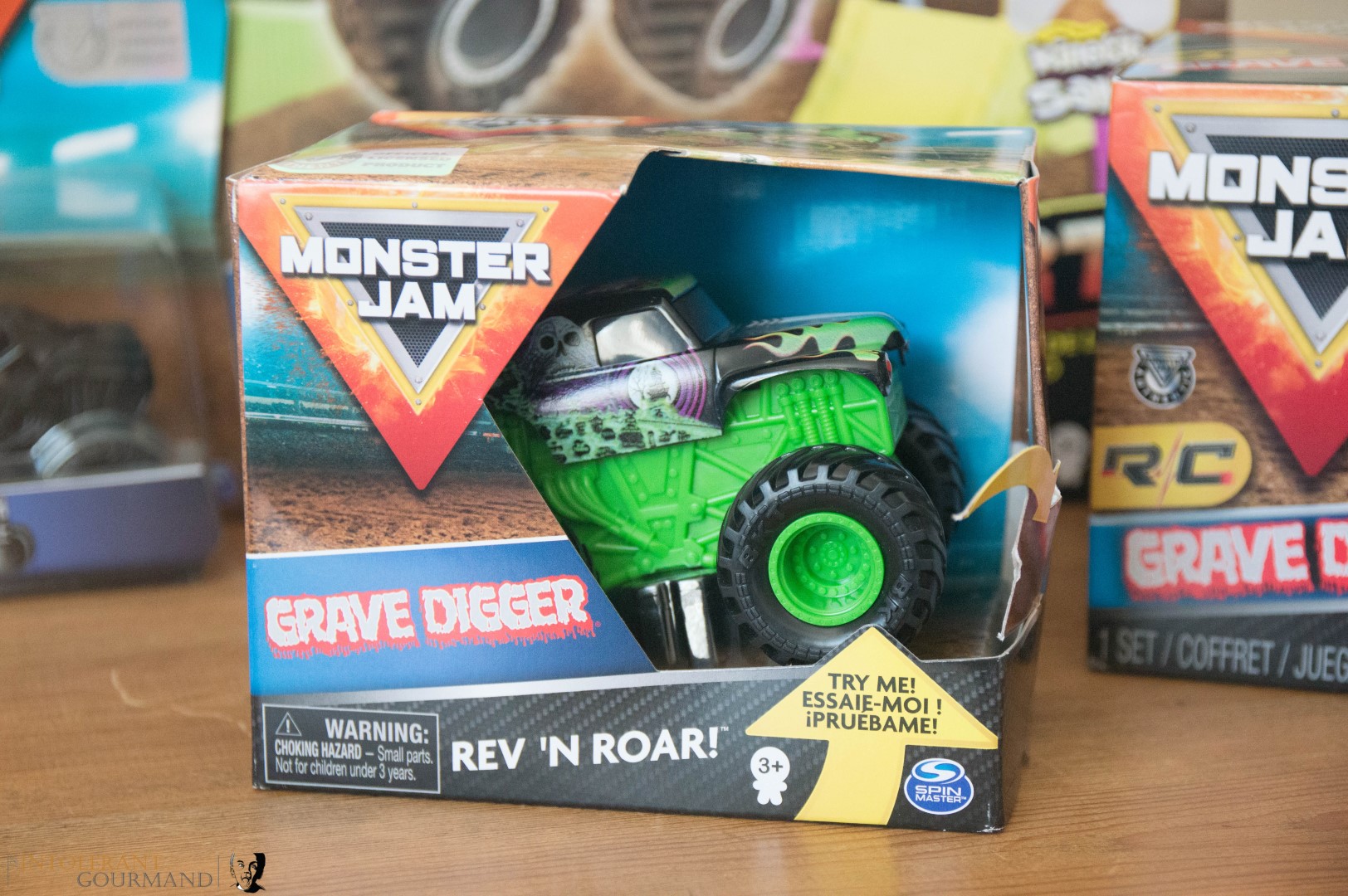 When I asked Callum for his thoughts, he said:

‘My favourite is the Megalodon because the cover in the shape of the shark is very cool, and it’s blue which is my favourite colour! And also, I like the suspension of them all because it looks really realistic!

You can see the engines in them, and the driver and the roll cage which is just like the real ones. They’re really good to turn because the suspension means it’s easy to turn them smoothly. And it’s important to have this because otherwise they’d snap in half, or damage their engines when in the arena!’

I will also add, that from an allergy parent perspective, the 1:64 scale trucks are so easy to clean from a cross contamination perspective. If they need a good clean, they can easily be put in a bowl of hot soapy water to clean them off and then left to dry.

You can find out more about the full collection over on the Spin Master website: Here

(NB: We were sent these items to review, but all thoughts and comments are my own) 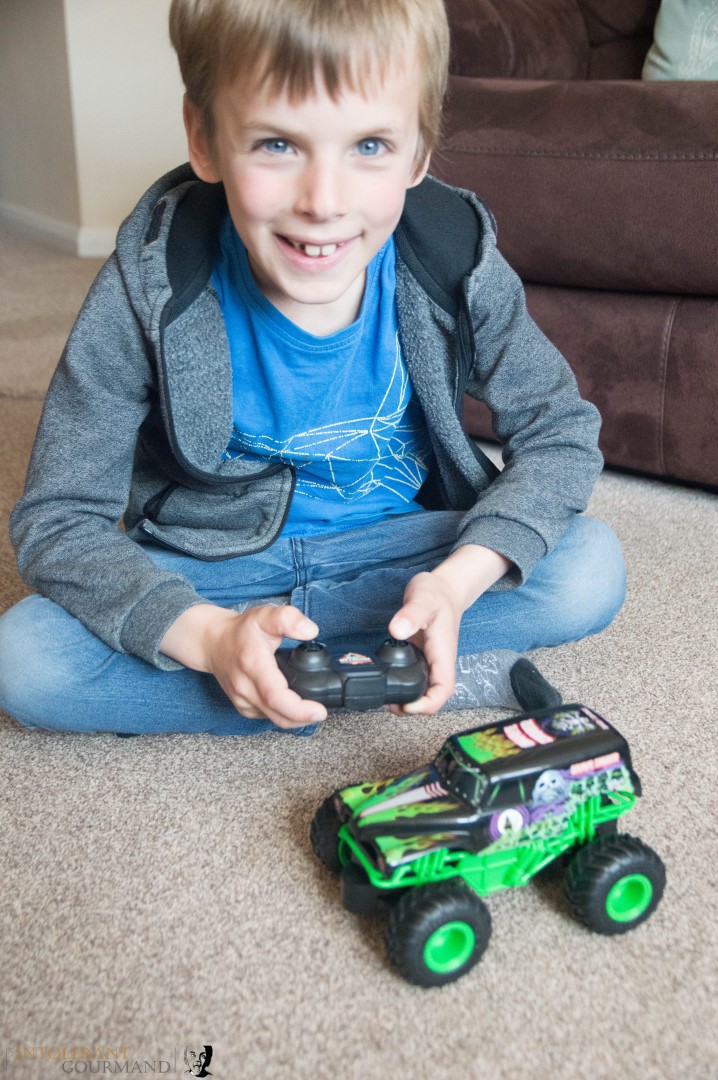